Home » Blog » Knee Pain » Ligament injury of the knee: When to see someone.

Imagine this scenario: You are playing sport on the weekend when you step hard to change direction and your knee buckles underneath you, leaving a sharp searing pain in your knee.  You hobble off to the sideline and ice the knee straight away.  The next day you go and visit ED who send you for an XRAY which shows no broken bones.  Great you think, though its pretty swollen so yo plan to give it a week or two to settle before getting back to sport.  But the knee doesn’t feel right, maybe the pain doesn’t go away, maybe it feels unstable, something is definitely wrong. But what? 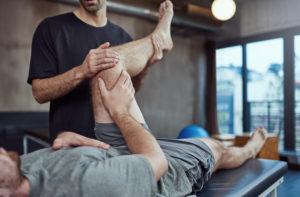 The above scenario is common to most physiotherapists, and highlights the need to seek a definite diagnosis as early as possible in a knee injury.  Most of the time a knee injury will be minor and not result in any significant ongoing problem but sometimes that is not the case.

Injuries to the knee

The knee is a large stable joint that is actually made up of two joints: the tibiofemoral and the patellafemoral components (three if we include the proximal tibiofibular joint.)  The stability of the joint is largely created by strong ligaments, large congruent articular surfaces and powerful muscles.  The stable structure of the knee allows it to perform its role whilst subject to large amounts of load during physical activity.  Accordingly, traumatic injury to the structures within the knee can lead to loss of stability and function.

These ligaments provide resistance to force in almost all directions and are injured when the force exceeds their capacity to respond.  For example, the medial collateral ligament is often injured by a force applied to the outside of the knee, forcing the knee open on the inside (a valgus force.)  Ligament injuries that are missed or poorly managed can result in:

Meniscus and cartilage – The cartilage of the knee has a role in reducing friction and to act as a shock absorber within the knee.  It is particularly vulnerable to traumatic injuries, often in conjunction with ligamentous injuries.  Healing is variable and can be poor due to a number of factors including poor vascularisation (blood flow.)  Appropriate conservative management early can improve the chances of a good outcome.Source: Anatomy & Physiology, Connexions Web site.  http://cnx.org/content/col11496/1.6/, Jun 19, 2013.

When to see someone

Always!  It is always in your best interest to make an appointment for assessment by a practitioner who is experienced in diagnosing and treating musculoskeletal injuries as soon as practical after a knee injury.  Commonly used diagnostic tests including XRAY and ultrasound are often not adequate for diagnosing common knee injuries.  Clinical suspicion of a major knee injury can be followed by MRI imaging and referral to a specialist as necessary.  When an injury calls for conservative management, early diagnosis and correct treatment allows for improved management and outcomes.

MCL injury can be split into three grades:

Whilst all are usually managed conservatively (with the exception of some grade III injuries) grade II-III injuries that are managed poorly can result in ongoing instability and pain in the knee.  Most Grade II and III injuries will be treated for a period of time in a range of motion brace that limits valgus stress to the knee, as well as physiotherapy intervention including swelling management, range of motion exercises, strengthening of the muscles of the core and lower limb, proprioception and walking and/or running retraining.  Recovery is dependent upon unloading and protecting the ligament while it heals, so early accurate diagnosis is crucial.  In the event that the knee remains unstable following immobilisation, surgery may be required.

So always see your physiotherapist or sports specialist after a knee injury.  They can help guide you on the path to recovery as soon as possible.

Although he is one of the most experienced and sought after Doctors of Physiotherapy in Australia, Brad makes all his patients feel like they are #1.

He also leads his team of caring reception staff and expert physiotherapists with the same degree of passion, which is why Sydney Physio Solutions has built the outstanding reputation it has.